Sixteen-year-old Nate is most himself when he is playing his guitar. He’s been playing since he was around 10 years old, and his favorite songs to play are all over the place – they range from heavy metal Metallica to ska punk band Sublime. What Nate most looks for in a good guitar song is a challenge. But last year, a different kind of challenge came creeping into Nate’s life.

In January 2019, Nate was diagnosed with osteosarcoma, a serious bone cancer. He’d been feeling pain in his left side, and when multiple specialists and several x-rays and MRIs failed to catch the cancer over the course of five months, Nate’s parents, Robin and Mike, brought him back to his primary care doctor’s office one more time.

“Based on the doctor’s reaction, we could tell there was more going on than we previously thought,” Robin said. “I remember sitting in the exam room and I was texting Mike, who was sitting right next to me, saying ‘He’s really quiet…’ There was a lot of leaving the room to talk… everything was setting off alarm bells.”

The doctor told Nate and his parents to go right to an imaging center for a CT scan, which ultimately confirmed their worst fear – Nate had cancer growing on his ribs on his left side, and it was creeping toward his spine.

Mike and Robin were scared and frustrated – what were the next steps? Why couldn’t we have found this earlier? How far had it spread since that first time Nate complained about pain in his side?

“It was hard to hear that they missed something on the x-ray, and it’s hard to think about what we could have done if we’d had Nate’s diagnosis five months earlier and knowing that it spread towards his spine during that time,” Mike said. “I struggle with that, but since then we’ve learned that unfortunately, ours sounds like a pretty typical story for this kind of cancer.”

Nate started chemotherapy right away, which drained his energy and made him swing back and forth between being nauseated with no appetite and being ravenously hungry. Many of the pieces of normal teenage life disappeared. Nate couldn’t go to school, and he spent most of his time in a hospital room with one or both parents. He says it took him a few weeks for him to fully process what was happening to him – he’d never imagined cancer would be part of his life.

“I was completely in a daze, for probably three weeks after I found out,” Nate said. “It didn’t feel like real life, it felt like I was dreaming because everything happened so fast.”

Since then, Nate has endured several rounds of chemotherapy and a major, 10 hour surgery that involved removing several of his ribs and shaving down the bones of his spinal column to ensure that doctors removed all detectable traces of the cancer in his bones. Post-surgery, Nate has had to learn to walk again – at first, just 10 feet at a time. He’s now able to walk multiple laps around his hospital floor, but he says his parents and physical therapists had their work cut out for them every time they had to convince him to get out of bed.

“When you get out of surgery all you want to do is lie in bed and do nothing, so everyone had to push me to do my PT, but I’m glad they did because now I really want to do it for myself,” Nate said. “I don’t want a weak back, I don’t want my arm to hurt – I want to be back where I was before surgery, and that takes a lot of work. It helps to see that it is making a difference.”

Nate says he used to be a glass-half-empty kind of kid when he was younger, but as he grew up, and especially since his cancer diagnosis, he’s left that kind of thinking behind. Even when people tell him that he’d have every right to be angry and upset, he says he just doesn’t see things that way.

“There are definitely things that are scary, and I understand my situation,” Nate said. “But I just don’t think moping around is going to do anything for me.”

Parenting a Teenager With Cancer

Robin and Mike say they are amazed at how positive Nate has been, despite everything he’s been through in the past year. He is incredibly tolerant of essentially being roommates with his parents. When asked about having to spend all his time in the hospital, he focuses on the good parts – like getting to watch The Office late into the night. He even says the hospital beds are actually pretty comfortable. But even in the midst of all his positivity, Nate’s parents can’t help but notice how much really has changed.

“When you have little kids, you’re always watching them to make sure they don’t choke or hurt themselves, and you’re teaching them not to talk to strangers or run out into the street,” Robin said. “But with Nate as a teenager, we were talking about college and future jobs. We thought we were past the parenting phase where we were worried about keeping him alive. But the suddenly, boom… his life is more at risk than it’s ever been. And we can’t protect him.”

Robin and Mike also struggle with answering the question all well-wishers ask when they run into them at school functions or at the grocery store – ‘How is Nate doing?’

“My response is usually, ‘We’re taking it day by day.’” Mike said. “Just because he’s doing better now doesn’t always mean the outcome is going to be what we want. Things in his treatment plan have been going pretty well, but we know there can always come a time when that isn’t the case.”

“We never begrudge anyone for asking that question,” Robin said, “but when you’re not in our shoes you just can’t begin to understand how such a simple question can kind of freeze you.”

Like many parents, Robin and Mike didn’t know much about childhood cancer before it became part of their lives. They said they’d heard stories about all the new treatment methods being developed for cancer in the past few years, and assumed that the disease was difficult, but beatable. Since Nate’s diagnosis, they’ve learned that childhood cancers and adult cancers are not the same, and advancements in adult treatment often doesn’t have an effect on kids.

While treatments for many adult cancers have improved in recent years, funding for childhood cancer research is much harder to come by. Researchers who have the skills and the ideas to make a difference often don’t have the funding to move forward, slowing progress down significantly. In fact, the therapies used to treat osteosarcoma in kids have not improved in over 30 years.

“If I could give back every gift card, every meal, everything we’ve been given since Nate’s diagnosis and put it into the research they need to better attack this cancer, I would,” Robin said. “Because I think there are brilliant minds out there who want to find answers. Right now, we have no idea what causes Nate’s kind of cancer. If we had even that piece of the puzzle, it would change how doctors go after it.”

Nate in His Element

Through all the chemotherapy, surgery recovery, painful physical therapy sessions and weeks in the hospital, Nate has found solace in two important places – music and faith. He jokes that he’s glad he picked the guitar instead of drums years ago, because a guitar is something he can still play from his hospital bed. He also says that in the year leading up to his cancer diagnosis, his faith became a larger part of his life, a change he thinks came at just the right time.

“The year leading up to this happening I felt I grew a lot closer to God, and then this happened,” Nate said. “My faith has helped me a lot. Right after my diagnosis, everything felt weird and surreal, but after a few weeks I noticed I just wasn’t scared.”

Robin says when Nate plays guitar, he’s not a kid with cancer anymore. In that moment, eyes closed, focused on the music, he’s as completely himself as he could possibly be. Everything else – beeping machines, hospital beds, cancer, – fades away. She remembers one moment that struck her most – Nate was playing a solo from the song YYZ by Rush and it stopped his favorite music therapist, Mark, in his tracks. Mark told Robin that he was impressed for two reasons – first, this solo is incredibly difficult. And second, it has a particularly special meaning.

“He said the notes of the solo are based on an ancient Aramaic prayer that the Hebrews prayed daily to God,” Robin said. “Of all the things Nate could have played, what he chose is essentially a prayer.”

Osteosarcoma has been around since the dinosaurs, and many treatments for it haven’t improved since the 1980s. But your donation to the Zach Sobiech Osteosarcoma Fund helps move groundbreaking research forward, moving us closer to a day where no child will have to face this difficult diagnosis. 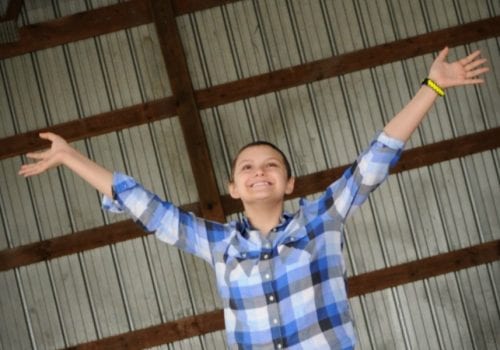 This photo is my favorite because it represents the hope we all had for a cure.  Jennie was literally reaching for the stars.  The only thing... 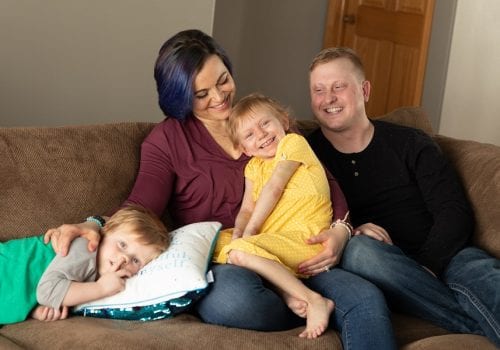 To his family, 9-year-old Joseph is a treasure, with a great love for friends, his big sisters, and a budding acting career. Today you would ne...