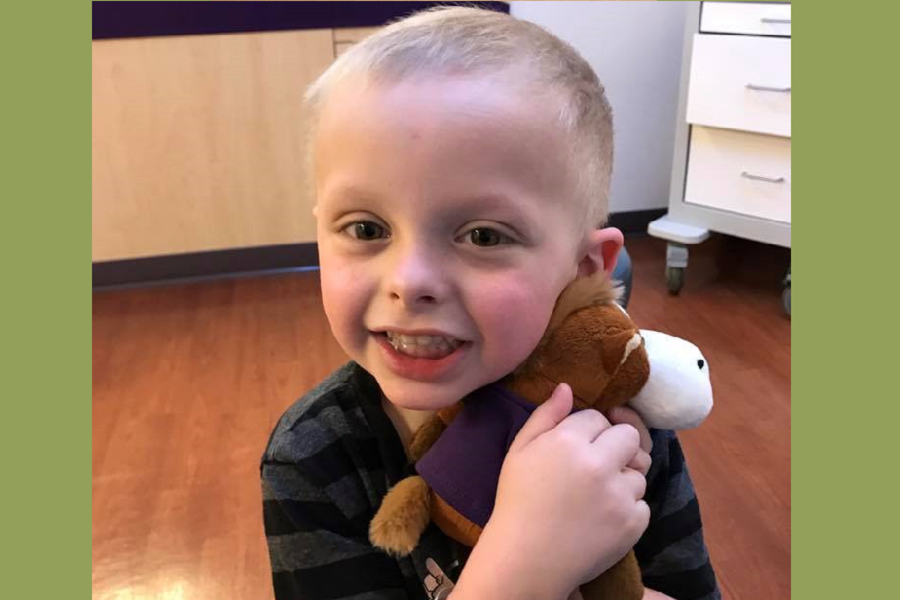 Six-year-old Logan sits quietly in the back seat of his dad’s car, watching his favorite show, Thomas the Tank Engine. Outgoing and polite, Logan makes friends easily, is a hugger, and loves to flash his big, toothy grin. While Logan watches his favorite train characters on his iPad, his dad, Eric, recounts from the front seat the day when Logan’s and his family’s lives changed forever.

“It happened so quickly,” Eric says. “My wife picked him up from day care one Friday and he just wouldn’t sit up straight. He was complaining of pain and just wanted to be held all weekend.”

When Logan was still not feeling well on Monday, his mom, Nancy, brought him in to the doctor.

After taking a look, the doctor sent them to the emergency room, where after hours of waiting and multiple tests, Nancy got the news she feared. A tumor was growing in Logan’s body, and it looked cancerous.

“She couldn’t even talk when she called me,” Eric said. He was working an evening shift in law enforcement as a community service officer at the time. “She put the doctor on the phone, who told us Logan would need to go by ambulance to the Children’s hospital in Oakland, over 250 miles away.”

Once there, Logan was diagnosed with Stage 4 high-risk neuroblastoma and started chemotherapy right away.

His first hospital stay was 32 days, and he experienced nearly every negative chemotherapy side effect possible. He lost the ability to walk because his treatments made him so weak. A life-threatening reaction to a stem cell transplant put him in the intensive care unit for five days.

Eric says he put over 5,000 miles on his car in one month driving to and from the hospital for Logan’s treatments. Despite all the tough days, Logan powered through and the chemo did its job – doctors were able to remove 90 percent of the tumor, which the chemo had turned into dead tissue.

After recovering from surgery, Logan was able to slowly ease back into being a regular kid – enjoying kindergarten, playing with his older brother and starting lacrosse. He was cancer free for two and a half years, which was a huge victory – a neuroblastoma relapse outside of two years is almost unheard of.

But on January 31, 2019, Logan’s routine scans revealed that the horrendous disease had returned.

“We were in utter shock and disbelief,” Eric said. “For kids who haven’t relapsed, survival rates are around 90 percent, but a relapse brings that number down to about 50. I wouldn’t wish that moment on my worst enemy.”

One of the biggest things Logan’s family learned during his fight against cancer was how few treatment options exist for kids.

Nancy, an oncology nurse who works with adults with cancer, sees firsthand how necessary second, third and fourth treatment options are for adults – options that don’t yet exist for kids like Logan.

“My wife does this for a living,” Eric said. “For adults, there are so many different treatment options. If one thing doesn’t work, you move on to plan B or plan C. You don’t see that for kids. When Logan was diagnosed, there was just one treatment protocol for neuroblastoma.”

Logan’s most recent scans were clear (yay!) but he still has a long road ahead of him.

Since Logan’s diagnosis, Eric and Nancy have become advocates for more funding for childhood cancer research. The treatment path Logan is on now didn’t exist when he was first diagnosed, and they are determined to advocate for better, safer treatments that give kids the chance they deserve to beat cancer. Eric has even traveled to Washington, D.C. to help advocate for more federal funding for childhood cancer research.

“I was shocked when I found out about the lack of research and funding,” Eric said. Currently, just 4 percent of federal cancer research funding goes to childhood cancer research. “I just can’t fathom how that’s ok with anybody.”

Logan and his family try to live day by day and appreciate the happy moments, especially when the future is so uncertain. More than anything, they appreciate the friends, family and strangers who have stepped up to help out along the way – whether its mowing their lawn, taking in their older son while they are in the hospital with Logan, or starting fundraisers in their honor.

“Whenever people ask what they can do to help, I tell them, do whatever you can,” Eric said. “Whether that’s money towards research or checking in and letting us know you’re thinking about us – just showing your support gives us strength to keep going.” 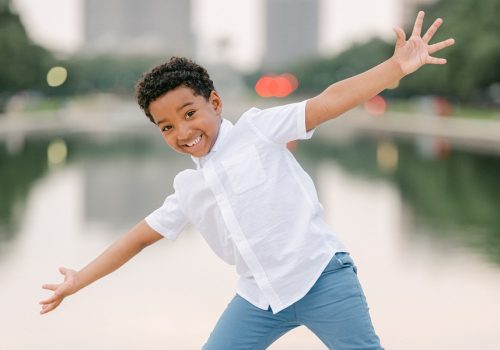 “It’s an immediate life change,” Mona said. “There’s so much information being thrown at you at one time, and Cash was asking questio... 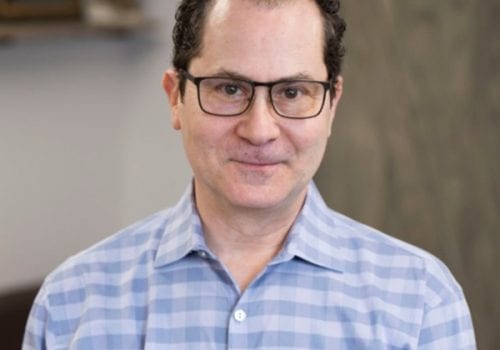 Daniel Gumnit wasn’t sure what to expect when he joined Children’s Cancer Research Fund as CEO in August, in the middle of a global pandemi...