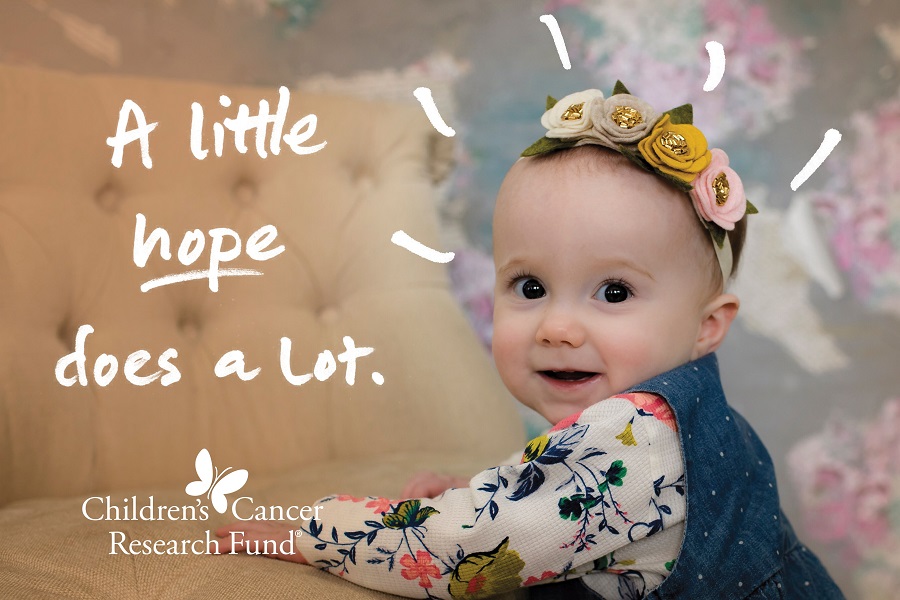 In December 2016, Amanda and Jeremy celebrated the birth of their twins, Isabelle (Izzy) and Isaiah. Just over a year later, they were back at that same hospital, receiving heartbreaking news.

Izzy had what her parents thought was some kind of diaper rash. Several doctor visits and multiple tests later, Amanda and Jeremy still didn’t have answers. When Izzy’s rash turned to bleeding, her parents took her to the emergency room. It was that night that doctors told them what no parent ever thinks they’ll hear – Izzy had cancer. Her tumor was later diagnosed as a germ cell yolk sac tumor.

“It was very surreal – It was New Year’s Eve. One year before, on the very same day, we were being discharged from the hospital after nine days in the special care nursery after the birth of our twins,” Amanda said. “We were in shock. Nobody really prepares themselves for that moment.”

Things moved quickly after that hospital visit. Izzy’s diagnosis was confirmed and she started chemo that week. Her parents pulled her out of daycare, made arrangements for grandparents to stay with Isaiah while they were at the hospital and called their employers to take time off. Izzy’s parents said all the adjusting they did right away left little time for the news of Izzy’s cancer to really sink in. In fact, it took them a while to even say out loud that Izzy had cancer.

“It was hard to say. I think I just didn’t want to admit that my kid had cancer,” Amanda said. “The whole time they kept telling us how responsive this kind of tumor is to chemotherapy and that the prognosis was really good, but I still had a little bit of denial.”

Doctors have described Izzy’s diagnosis as one in a million, and that’s exactly how Amanda and Jeremy see Izzy. Her personality showed through chemo treatments – she would have ‘dance parties’ in her crib when her energy was up and tease doctors and nurses by pretending to give them a toy and then pulling it back from them with a giggle. She loved playing with the bubbles that child life specialists would bring in to distract her from needle pokes and scary procedures. Despite nausea caused by chemo, she would still eat a handful of random foods: three-bean hot dish and barbeque were among her favorites.

Amanda and Jeremy said their perspective as parents has changed significantly since Izzy’s diagnosis. They feel lucky that Izzy’s tumor was highly treatable and that she was able to stay healthy throughout all of her chemo treatments, especially since they’ve seen so many families with very different stories.

“I can still remember riding the elevator with a family who said they were going to be in the hospital anywhere from 40 to 60 days,” Jeremy said. “I can’t imagine how hard that would be.”

Amanda and Jeremy hope Izzy can stay healthy and grow up to have a normal life, but they know the signs and consequences of cancer and its treatment will always be there. Although her tumor has shrunk significantly, she’s off most of her medications and her feeding tube is gone, some signs still linger.

Because of the location of her tumor and the chemotherapy used to treat it, her parents are unsure if she’ll be able to have children someday. They say they don’t yet know how or when to explain to Izzy all the difficulties she went through in the first years of her life. These are things no parent thinks they’ll have to consider when their daughter is just a toddler. However, Amanda and Jeremy say they are thankful when they look back and hopeful when they look forward.

“God has a plan for everyone, so I don’t think we’d go back and change things if we could,” Amanda said. “Overall we feel pretty fortunate. We’re thankful for everything we’ve had so far – for our parents for helping us through it and the amazing people at the hospital who we trusted to take us down the right path. It really was a team effort, and we’re thankful for where we are.”

Childhood cancer researchers often struggle to get government funding because many childhood cancers, like Izzy’s, are considered too rare for large government grants. Learn more about how you can get involved and move research forward for kids like Izzy.

Adalyn of South Saint Paul, Minnesota was diagnosed with Retinoblastoma on September 24, 2012, at mere 9 months old. “Never did we imagine th...

I’ve never seen a ghost or a spirit.  I’m terrified of the thought, but I’m still intrigued.  Spirits to me are otherworldly-a concept ...