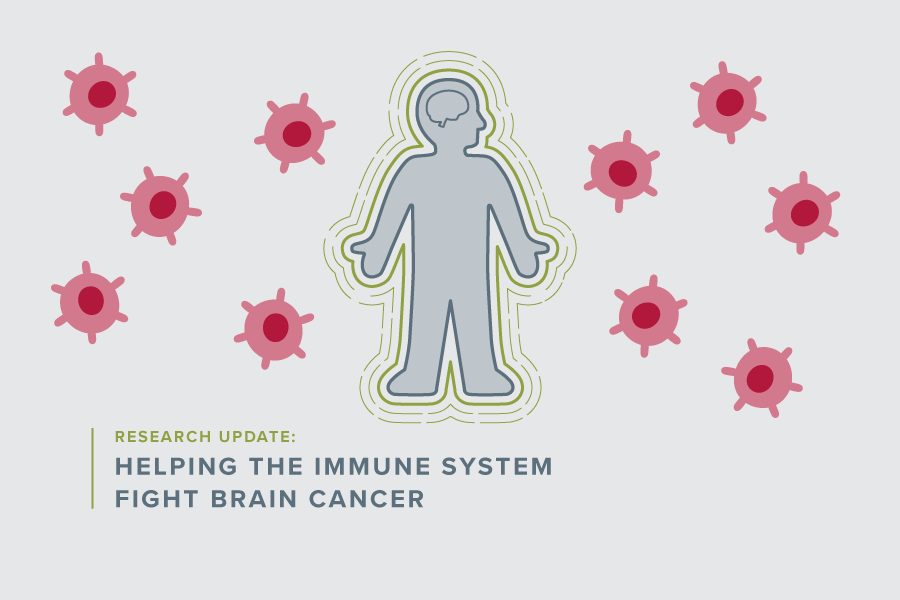 Even as a college student volunteering in the cancer ward of his local children’s hospital, Robert Galvin, MD, knew he wanted to become a pediatric oncologist. But it wasn’t until his pediatric residency, when his wife was diagnosed with an aggressive brain tumor, that the power of cancer research truly hit him. After all the standard treatments failed to stop the cancer, the young couple turned to a new immunotherapy treatment offered through a clinical trial at the University of Minnesota. It worked.

“I wanted to take a silver lining from that experience and pursue a career in oncology research,” said Galvin, now a fellow in the University of Minnesota’s Department of Pediatric Hematology & Oncology. “It definitely gave me direction and motivation to pursue brain cancer research specifically.”

With support from an Emerging Scientist Award from Children’s Cancer Research Fund (CCRF), Galvin is searching for new treatments for tumors of the central nervous system, the deadliest of childhood cancers. He hopes his work leads to innovative treatment options like the one that saved his wife’s life.

“The treatment to date for progressive childhood cancer mostly consists of surgery, radiation and chemotherapy, and the treatments are often very intense. This approach does not work for everyone and sometimes leads to toxicity for kids,” he noted. “Just the prospect of having a new way to do things, the thought of having more options for kids and less toxic treatments, is exciting.”

Galvin is studying proteins that keep the immune system from functioning properly.

“One of the ways that childhood cancers are able to grow is they learn how to get around our natural immune system, which normally goes around plucking out cells that aren’t behaving themselves. There are many different ways that cancers can do that,” he explained. “In the second year of my fellowship, I was trying to identify particular proteins in childhood brain tumors that they may use to turn off the immune system. I found a recurrent theme between a lot of different high-grade pediatric tumors, including two particular proteins that were highly expressed. It made me wonder: if we inhibit them somehow, can we help the immune system recognize and fight these cancers?” 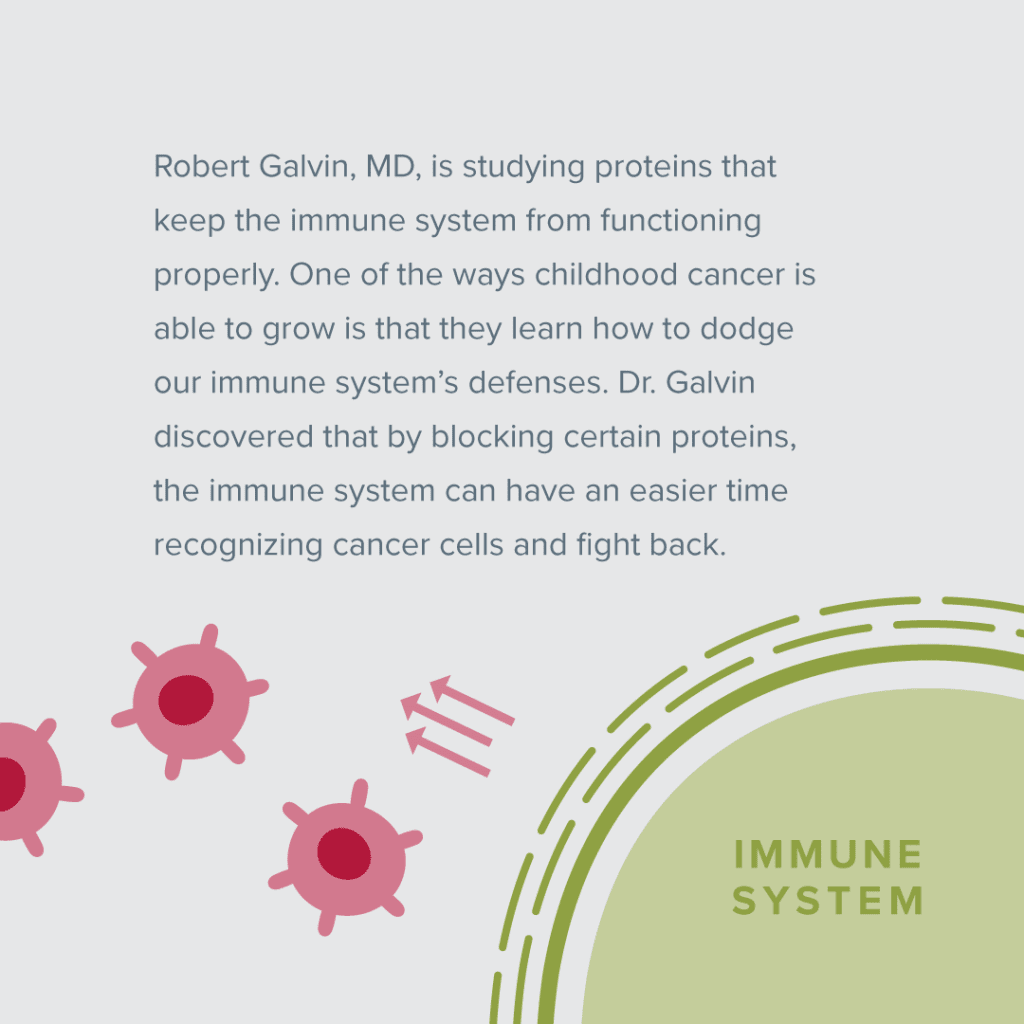 The work is ongoing, but early results have been promising. “What we’ve found is by blocking one of these proteins, EZH2, we can make the cancer more exposed to the immune system,” he said. “Normally cells in the body put up a flag to display abnormal proteins to the immune system, and cancer cells learn to take down that flag. By blocking this protein, we’ve been able to demonstrate that we can bring back that flag signal.”

The other protein he’s studying, B7-H3, helps cancer cells turn off immune cells even if they can recognize the cancer properly. In 2022 he plans to test whether inhibiting that protein makes a difference. “We hope to find a new approach to make cancer more susceptible to the immune system since current immunotherapy approaches help just a minority of patients,” he said.

Those two proteins are found in certain types of brain tumors, including high-grade glioma, diffuse midline glioma, medulloblastoma, ependymoma and atypical teratoid rhabdoid tumor. “That was one of the interesting things that came out of my earlier research. It turns out that the way the immune system and cancer talk to each other varies from person to person, even with the same disease type,” he said. “So I focused on what proteins are a factor in all high-grade brain tumors.” Through modeling, he found that higher levels of EZH2 and B7-H3 are associated with lower survival rates, suggesting their significance.

“If we can demonstrate in the lab that the approach of targeting these proteins works, I think it would go a long way toward laying groundwork for a pediatric clinical trial,” he said.

What Galvin learns from this research could eventually inform studies of other childhood cancers, too. “While the brain or central nervous system is a unique part of our body, a lot of solid tumors outside of the nervous system have the same features of being really good at hiding from the immune system,” he said. “Understanding the mechanisms could lead to smarter immunotherapy treatment approaches.”

When Galvin looks toward the horizon of future childhood cancer research, he sees hope and potential.

“People are really excited about activating the immune system and trying different approaches to treating cancer. With technological advances and with research collaborations being deeper and more nuanced now, I think the work will accelerate, and I hope that translates to positive impact for patients,” he said.

It can be challenging to get started in biomedical research as a young physician-scientist, he noted. Without CCRF’s support, he would not have been able to conduct his own research study. “Philanthropic support provides wonderful opportunities for young investigators and helps foster exploring new ideas,” he said. “As someone who wants to do better for children with cancer, I know doing research is the best way to do that. I am thankful to everyone who has contributed to CCRF and its mission.” 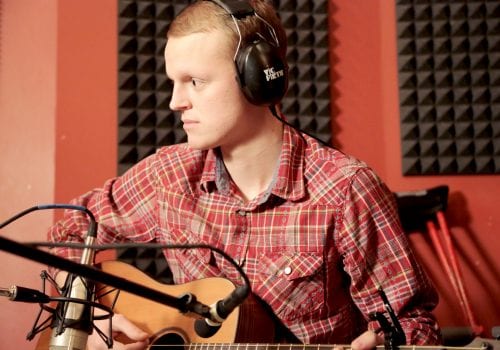 DonateIn October 2020, Disney+ released the movie “Clouds,” an inspiring film about teenage songwriter Zach Sobiech who rose to fame before... 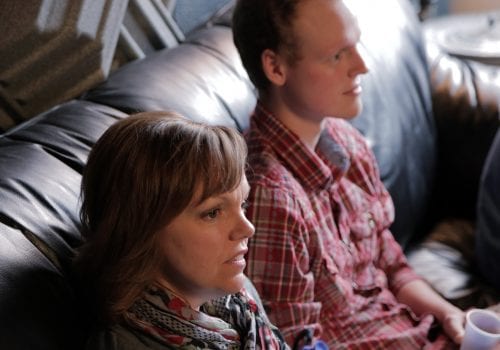 Laura Sobiech is the author of “Clouds: A Memoir,” a book that chronicles the final year of her son Zach’s life before he passed away f... 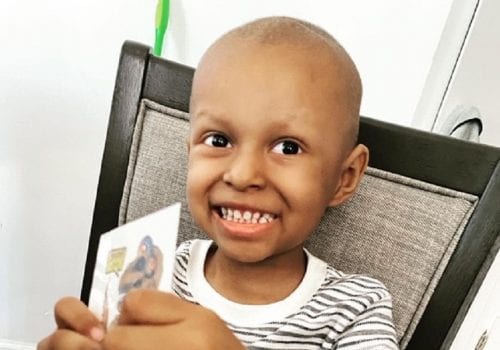