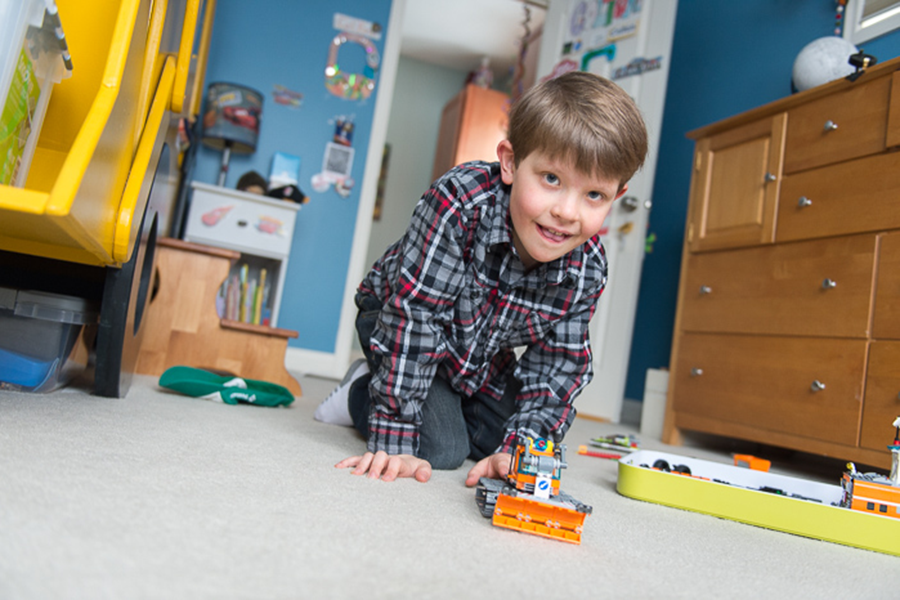 Colton skates in his socks across the wood floor to the fish tank and shows off “Goldy” and “Yo-Yo,” his prized goldfish. Like any 7-year-old boy, Colton loves Legos and playing hockey. But what many don’t know is that he has a four-inch tumor embedded in his leg due to a genetic disorder called neurofibromatosis type 1 (NF1).

NF1, a condition that causes tumors to grow in the nervous system, can cause brain tumors, optic gliomas, pea-sized tumors and larger plexiform tumors. Most are benign, though plexiform tumors can become cancerous.

Typically, the disorder first appears in the form of café-au-lait marks, or spots with darker pigmentation.

When Colton was a toddler, his parents, Sarah and Nick, noticed a dime-sized mark above his eyebrow they thought was a bruise. When it didn’t fade, they brought it up to their pediatrician who immediately recognized the difference in pigment as a café-au-lait mark.

If a patient has six or more such marks larger than 5 mm in diameter, they are a diagnostic indicator of NF. Colton, indeed, had another fainter mark on his body, and they soon found another. Some are so faint they can be seen only with a special light, and more have become visible to the naked eye as he’s gotten older, and they have darkened. Colton was referred to an NF specialist, who officially diagnosed him with NF1 and told them to watch and wait for skin changes or tumor appearances.

Since then, the mantra “watch and wait” has circled around their family. “It’s the tagline with NF,” says Sarah. “It seems like we’re always waiting for a big problem to occur.”

Colton has had mild symptoms of NF, including delayed speech and motor skills, intestinal problems and pea-sized tumors growing from small nerves under his skin. These cutaneous tumors have multiplied throughout his body since diagnosis. He also has a plexiform tumor in his leg, which is the largest they know of, though others could exist. Sarah first sensed the tumor when she was trimming Colton’s toenails.

“The lighting caught his leg just right,” she says. “I saw rippling on his skin, and something seemed strange.”

Sure enough, doctors discovered a 4 x 4.5-inch plexiform tumor. “Imagine gummy worms woven around nerves,” says Sarah. “It’s bumpy and ripply and hard to tell where it begins or ends.”

The tumor has grown and spread, and doctors think it will continue to do so.

Surgical removal is often too dangerous and, in some cases, tumors regrow more aggressively. Chemotherapy is an option for only severe, life-threatening cases such as a tumor that constricts basic body functions like breathing or that grows vastly outside the body.

Colton has yearly checkups to ensure there are no immediate dangers. But, that doesn’t always put his parent’s minds at ease.

“Even the little things make me wonder if it’s something bigger,” says Sarah.

In the past year, Colton had a pattern of severe headaches he described as having bees in his head. This prompted Nick and Sarah to request an MRI with Christopher Moertel, M.D., a pediatric neuro-oncologist at the University of Minnesota Masonic Children’s Hospital.

Nick believed Dr. Moertel’s treatment practices were a notch above the others,’ as he was willing to scan Colton’s head right away. Thankfully, the MRI didn’t reveal any tumor growth.

Today, while Nick and Sarah watch and wait, they focus on fundraising for NF research.

“We’re on the lucky side because we know Colton isn’t majorly impacted right now, but we know it can progress,” says Nick. “We want to do our part to help find a cure. If a cure can help Colton and others with NF in his lifetime, that would be ideal.”

Between checkups, scans and blood draws, Colton is doing great in school and works hard on his hockey team.

“When I watch him play hockey I think, ‘I bet you’re the only one skating with a giant tumor in your leg,’” says Sarah. “He’s incredible.” 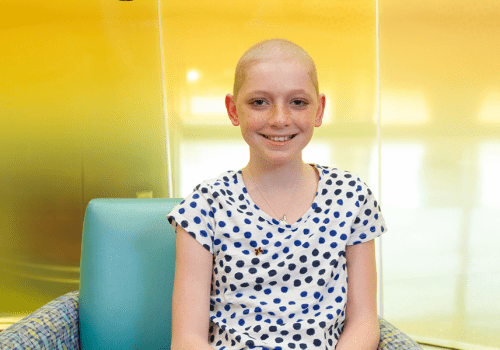 Six-year-old Logan sits quietly in the back seat of his dad’s car, watching his favorite show, Thomas the Tank Engine. Outgoing and polite, L...