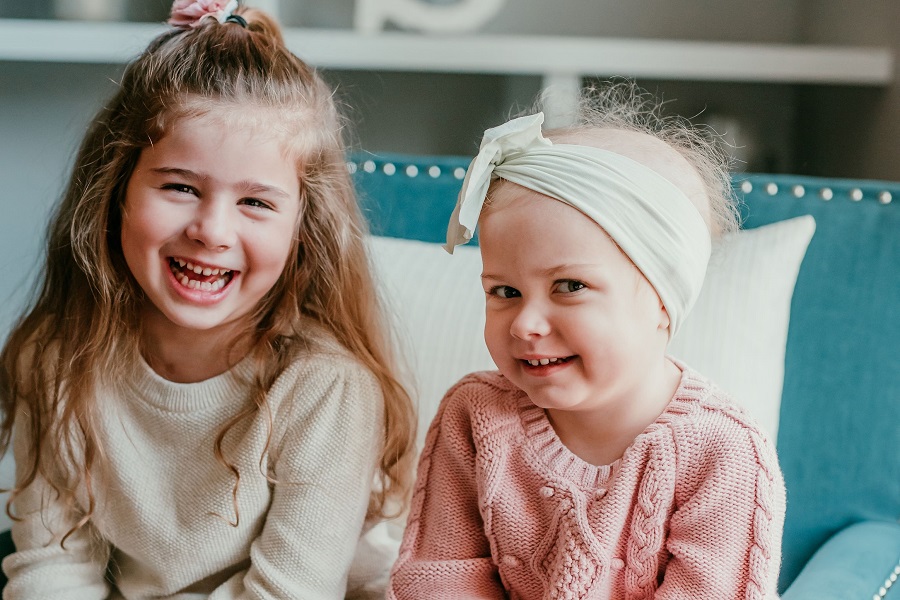 Four-year-old Harriet and her sister, Ada, 6, went downstairs into their play room after getting dressed for the day. Harriet was missing her hair, which had fallen out for the second time due to her chemotherapy. She knew she was headed into clinic that day and wanting to “look beautiful.” She found a braid from an Elsa “Frozen” costume, and asked Ada to clip it to the back of her dress. Ada was immediately complimentary of Harriet’s look and Harriet was so proud of her braid that she wore it the entire day, showing it off at every opportunity.

Harriet’s mom, Kelly, says this is one of the many bittersweet moments where she’s seen childhood and cancer collide.

“That was a tough day for me, because it was a beautiful moment between the two sisters,” Kelly said. “But also so sad, because this is Harriet’s life – stroking that braid, wanting her hair back.”

Harriet’s cancer journey began in August 2019, in her pediatrician’s office – Kelly took Harriet in to the doctor for an ear infection that wasn’t going away. But when a nurse practitioner found Harriet’s lymph nodes and spleen both felt enlarged, she decided to do a blood test. When the nurse came back in the room with the results in her hand, she had tears in her eyes. Harriet’s white blood cell counts were extremely high – a normal count is around 10,000 – Harriet’s was 470,000.

“I remember she said, ‘This is not good news,’” Kelly said. “She told me, ‘You’re going to go right now to the emergency department at Masonic Children’s Hospital, and the reason you’re going there is so you can talk to some really good oncologists.’ When I heard that, my heart just kind of stopped.”

Kelly immediately called her husband, Paul, to meet them at the hospital. A few hours later they received the official diagnosis – t-cell acute lymphoblastic leukemia. 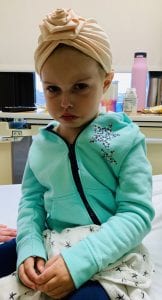 Harriet during one of her many clinic appointments – nurses said her “spiciness” will serve her well during the long fight ahead.

The first month of treatment was especially hard for Harriet and her family – not just because the first month includes the harshest chemotherapy regimen, but also because meeting new doctors and nurses every day in a hospital was an overwhelming experience for their then 3-year-old.

“I call Harriet my ‘spicy one’” Kelly said. “It’s one of the things I love most about her. She’s so confident and she is able to vocalize who, and what she likes, or doesn’t. And sometimes that means that Harriet doesn’t automatically like people. She is very selective, and it takes some time to earn her trust. Some of her most common phrases during that first hospital stay were, ‘I want to be alone,’ ‘I want you to go away,’ and ‘stop bothering me.’”

But Harriet’s spiciness has also made her incredibly tough. Kelly said that for the first time a few weeks ago, Harriet helped her mom put on the cream and plastic wrap over the port in her chest – a usually painful and scary experience for Harriet – without crying.

“It was sad to see that she has to do that, but it also made me think how far we’ve come during this time,” Kelly said.

Kelly says that Ada, Harriet’s older sister, has been her biggest supporter. Harriet was diagnosed just two weeks before Ada’s first day of Kindergarten. Shortly after the school year began her class read a book about wishes. Ada’s teacher asked the class what they’d wish for if they could have anything in the world. Ada’s wish was simple and selfless – she said she wished for Harriet to be better. 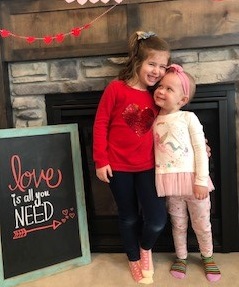 Ada makes a point to help care for her little sister as she fights cancer.

Ada always compliments Harriet on the head wraps she uses to keep her head warm and she is full of encouragement when it’s time for Harriet to take her medicines. She lets her sister sit next to her while she participates in distance learning with her Kindergarten class. Before COVID-19 hit, Ada went with Harriet to any appointment she could.

“Ada is the sweetest, she just wants to take care of Harriet,” “Kelly said. “I tell them how smart they are and how brave they are all the time, and Ada tells her sister unprompted how cute she looks with or without hair.”

Kelly says that terms she now uses daily, like platelets and white blood cell counts, were foreign to her before cancer hit her own family. She was surprised to learn that of all the federal funding that goes to cancer research, only 4% of that funding goes to research for childhood cancers.

“I think of it like this – I have never spoken to a single parent whose top priority wasn’t their child(ren) and who wouldn’t do anything for them. So if all of our kids are so important to us, why are we not spending more money on the research that could save their lives?”

Although recounting Harriet’s cancer story is sometimes painful, Kelly thinks it’s important to share so people with the power to make a difference can see the faces of the kids who need their help.

“I’m not a scientist, I’m not a doctor, so I’m not doing the actual work to cure cancer and make treatments better for my daughter,” Kelly said. “So the way we can help is sharing the story of Harriet and telling people why it’s so important to raise this money – because cancer research is expensive, and we need it for Harriet and the kids like her.” 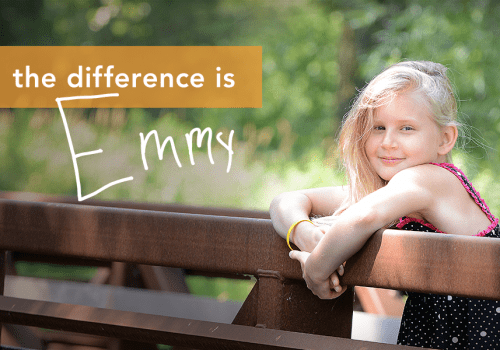 Flipping up her sandy-blond ponytail, 8-year-old Clementine showed us the scar across her skull from brain surgery. “See, I bet you didn’t ...

I’ve stared at cancer every day for the last two years, not once, not twice, but three times. Cancer knows I’m not going to budge; I’m not...