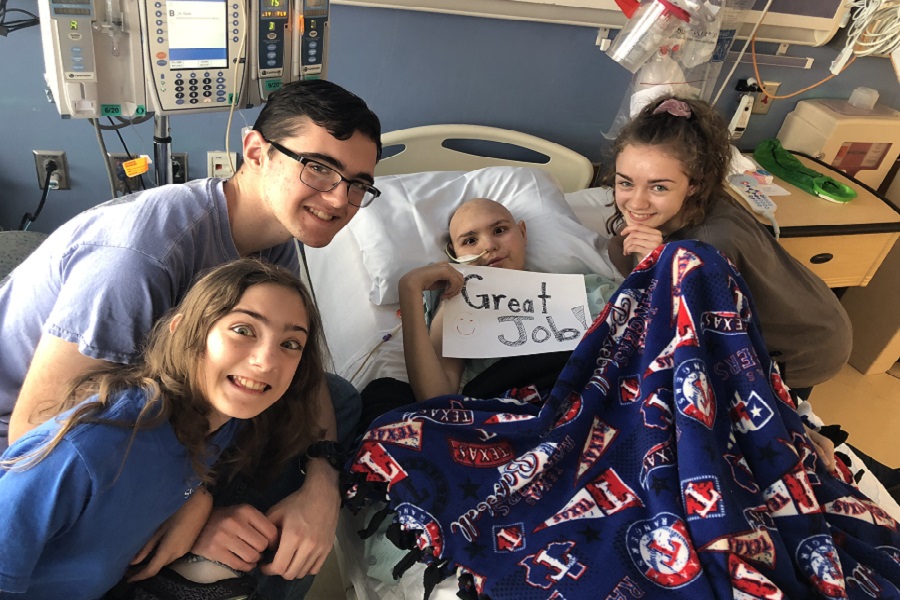 When Gabe beat acute lymphoblastic leukemia at age 4, his parents, Nicole and Michael, thought they were putting cancer behind them. He’d been diagnosed right after his first birthday and struggled through three years of chemotherapy before finally being declared cancer free. The further away that day got, the less they thought about it.

“You don’t really worry after five years,” Nicole said. When a child has been cancer free for five years, they are usually considered cured. “But then Gabe started having back pain around Thanksgiving.”

That began their nervous parade through many doctor’s offices to find out what might be wrong with their 13-year-old son. When Gabe first got an x-ray, it was clear this was something serious – he had multiple compression fractures, and the x-ray showed that his back was broken in three different places.

Nicole says she had a sinking feeling at that point that she knew what kind of bad news was coming. Unfortunately, she was right – Gabe was diagnosed with relapsed ALL the day after Christmas 2019.

Because Gabe’s cancer was a relapse, doctors have to treat it much more aggressively than they did when he was a toddler. Nicole says that’s not only harder on him physically, but also mentally.

“You can’t distract a teenager the way you can a younger kid,” she said. “Toys don’t make it better, and they are old enough to know that their lives are being terribly interrupted.”

The intense chemotherapy Gabe is receiving causes him to feel terrible most of the day – his cheeks are often swollen, and he can’t do much when he’s so tired or in pain from the treatment. When he’s feeling even slightly better, he likes to play Zelda or Luigi games on his Nintendo Switch or playing card games with his siblings. He liked to ride his bike before his back pain started, and he’d asked for one for Christmas – something he won’t get to take advantage of now that he’s focused on beating cancer for a second time.

“We know it’s going to get better, but he’s just in the really hard part of treatment right now,” Nicole said. “We’ve been through this before and we know it gets better, but we also know how hard it can be.”

When cancer took over their lives for a second time, Nicole decided not to try to plan too far into the future. On some of Gabe’s worst days, he’s just trying to make it through the hour or the afternoon. Nicole says when Gabe is in this much pain, no gifts or words of encouragement can truly make Gabe feel better, but they can make him and his family feel like they aren’t walking this journey alone.

“I remember I was at Baskin Robins a while ago and the young man behind the counter must have sensed I was having a hard time. He told me he’d give me his employee discount,” Nicole said. “It probably saved me 50 cents on the ice cream, but it felt good to see that he was reaching out to lighten the load however he could.”

Nicole has the unique experience of seeing how cancer treatments have changed over the past 10 years – Gabe has the same cancer he did 10 years ago, but his treatments are much different.

“We’re in the same facilities with the same doctors, but we can tell the knowledge has increased so much. There’s a night and day difference between then and now.” Nicole said. “There’s such a huge need for more research, and knowing that there are strangers out there who care to help us get through this long journey helps remind us that we’re not alone.”

Your Donation Makes a Difference

Treatments for Gabe’s cancer have gotten better over the past 10 years – but we still have a long way to go. Your donation makes progress towards better, safer treatments possible.