Behind the scenes of the Zach Sobiech movie, “Clouds” 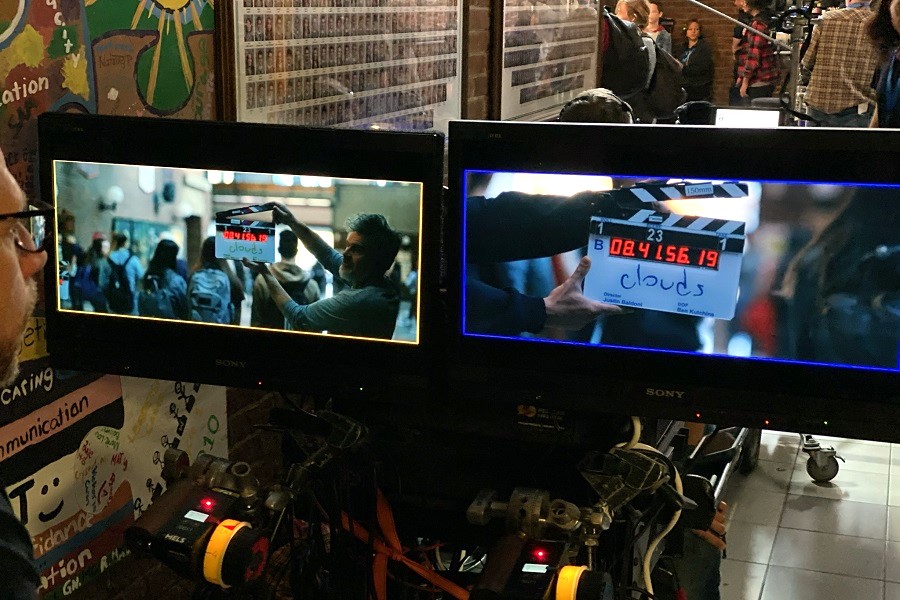 “Clouds,” an original movie from Disney+, is based on the true story of Zach Sobiech, a Minnesota teen who passed away from osteosarcoma in 2013. Justin Baldoni, who directed “Clouds,” met Zach and his family in 2012 while filming a documentary called “My Last Days.” Ever since, Justin has been determined to make Zach’s story into a feature film.

For more about Zach, read The True Story Behind “Clouds” and the Real Zach Sobiech

Viewers who watch “Clouds” on Disney+ will see the incredible story of a teen who changed the world while dying, but they’ll also see some little pieces of the real Zach in the film, as well as cameos from his family and friends. Here are some of the more subtle ways that “Clouds” honored Zach and his family, on-screen and behind the scenes. 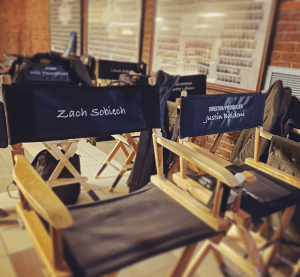 A director's chair with Zach's name on it sat empty on set during filming.

Zach’s director’s chair. The crew placed an empty director’s chair with Zach’s name on it on set to honor him during filming. “Thank you Zach. I know you’re here - and you will be right next to me guiding every scene and every shot of this picture,” Justin Baldoni posted on Instagram on the first day of shooting. “No one sits in your chair but you.”

Fin Argus, who plays Zach, wears many of Zach’s real clothes in the movie. The movie’s wardrobe department had the Sobiechs send some of Zach’s favorite shirts and hats to Montreal, Canada, where the movie was filmed, so Fin could wear them during shooting. Fin also used Zach’s real crutches.

The movie set had a “designated crying area.” Because of the emotional nature on the movie, it wasn’t unusual for the cast and crew to get emotional while filming – so much so that it became a running joke on set. Someone even created a “designated crying area” that included a box of tissues and a sign that said, “Please limit episode to 15 minutes.”

The Prom and Concert Scenes

Zach’s family and friends acted as extras. Seventy of Zach’s family and friends travelled to Montreal, Canada to act as extras in two of the movie’s scenes – the Jason Mraz concert scene and the prom scene. The extras included Zach’s extended family, childhood friends and their families, high school classmates, employees from KS95, the Minnesota radio station that was the first to play “Clouds” on the radio, and employees from Children’s Cancer Research Fund, which administers the Zach Sobiech Osteosarcoma Fund. Laura Sobiech, Zach’s mom, now works at Children’s Cancer Research Fund as an outreach coordinator, helping families like hers tell their stories and raise money for research. 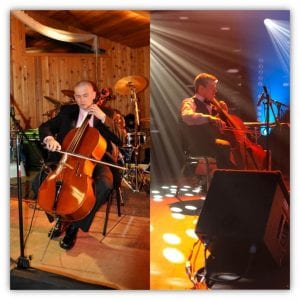 Mitch, one of Zach’s closest friends and musical collaborators, plays the cellist in the prom scene. “Being on set was incredible because it didn’t feel like the people there were doing this as a job,” Mitch said. “It felt like everyone was very invested. It was a genuine, loving atmosphere.” Mitch also appears behind Zach as a student in a classroom scene. To hear more from Mitch about watching his friend’s life become a movie, read Zach Sobiech’s friends and then-girlfriend talk “Clouds” movie.

The cast and their real-life counterparts

The real Laura Sobiech worked closely with Neve Campbell, who plays her in “Clouds.” Neve Campbell called and texted Laura, Zach’s mom, to ask how she would say certain lines, what she was thinking at specific moments portrayed in the film, and even her on-screen wardrobe: Laura was able to weigh in on what clothes she would or wouldn’t wear in real life. 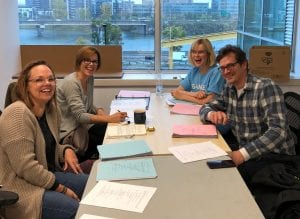 Laura helped re-write a scene where she and her husband, Rob, get in an argument. “I was reading this scene with Neve (Campbell) and Tom (Everett Scott) and something about it just wasn’t working,” Laura said. “So I said to them, ‘Do you want to know what Rob and I were really fighting about?’ We talked about how both of us were hyper-focused on Zach, and as a result, I was feeling really lonely. So we sat down and re-wrote some parts of the scene. I think having that conversation helped Neve and Tom know how to play it, because they knew what was underneath, and I think it played really well.”

Fin Argus and Madison Iseman visited Minnesota before filming. Fin Argus (Zach) and Madison Iseman, who plays Amy Adamle, Zach’s then-girlfriend, both visited Zach’s friends and family in Stillwater, Minnesota before filming began. “None of us really knew what to expect, but it went so well and it’s something I will never forget,” Amy said. Fin and Madison spent time with Zach’s friends and family in the Sobiech home and Zach’s bedroom, which were both meticulously re-created for the film. 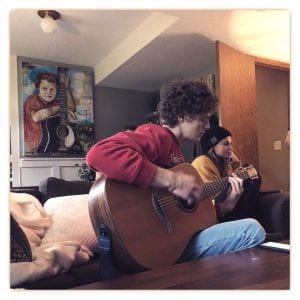 Fin Argus, who plays Zach, plays guitar in the Sobiech's basement in Minnesota. A painting of the real Zach hangs on the wall behind him.

Sabrina Carpenter and Sammy met in real life before filming. Sabrina Carpenter, who plays Sammy, also visited the real Sammy at her apartment in New York before filming. “Being with her felt so normal so fast, which was weird considering how not-normal the situation was,” Sammy said. “She’s a great gal.” Both Sammy and Amy spent time with their counterparts on set, and got to have a say in the casting of their roles.

Grace and Amy have cameos. Zach’s little sister, Grace, has a cameo early in the film as a high school student, and Amy appears in a later scene in a dance studio alongside Madison Iseman, the on-screen Amy. 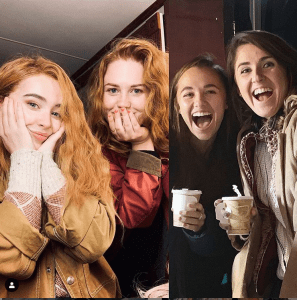 Sammy and Zach’s original songs are featured in “Clouds.” Sammy and Zach recorded their album “Fix Me Up” together before Zach died, and many of their songs, including “Fix Me Up,” “Blueberries,” “Sandcastles” and “Clouds” are featured in the movie. Sammy moved to New York after Zach’s passing, and had trouble making music on her own for a while. “It’s been a bit of a bumpy road, since we always made music together,” she said.  But in 2019, Sammy wrote a song, “Purple Pink,” that she finished on the sixth anniversary of Zach’s death. “It’s about wishing that someone you’ve lost would show up and hang out and you could just do something simple together, like have dinner at your apartment. It’s the first song I’ve finished in forever, and finishing it on that day felt really meaningful.” “Purple Pink” plays after the end credits of “Clouds.”

To learn more about the real people behind “Clouds,” read our blog post: The True Story Behind “Clouds” and the Real Zach Sobiech. 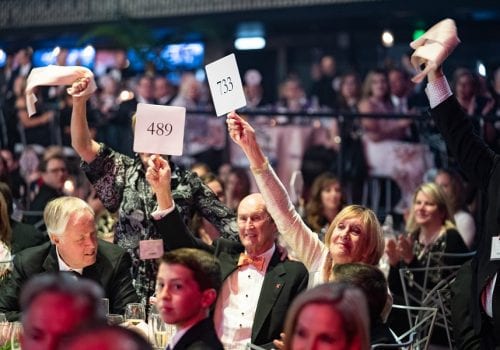 This past April, a group of incredibly generous supporters gathered at the Armory in downtown Minneapolis to celebrate progress and invest in t... 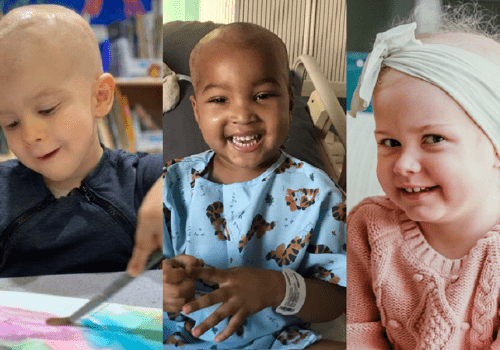 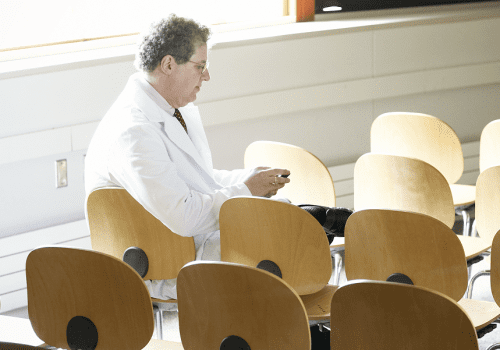