As Each Day Passes, My Heart Gets Heavier 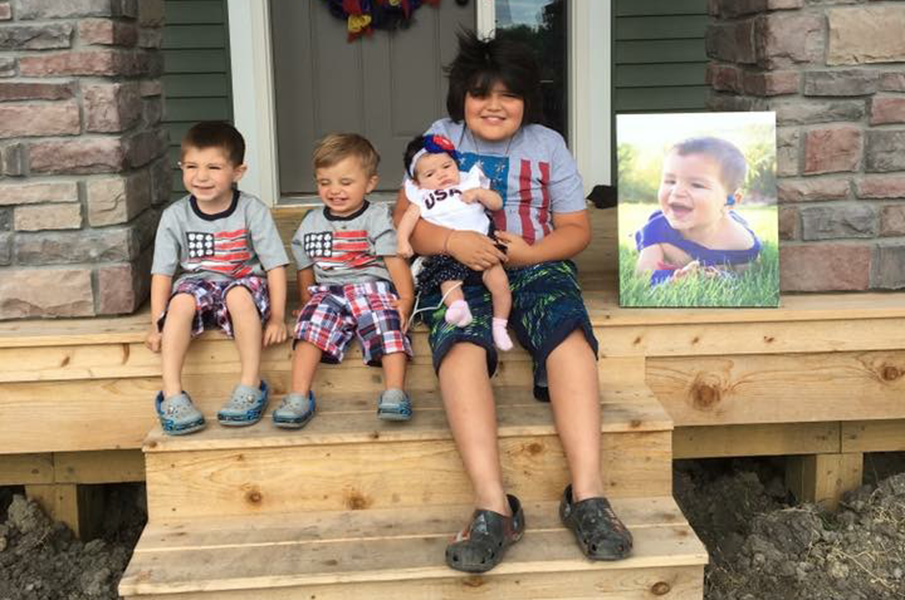 As each day passes, my heart gets heavier.

With each sunset, I feel another 100 pounds across my back.

When my son Dom was 3, we mentioned to my mom possibly wanting to have more kids. I couldn’t understand how I could love children the same because at the time I couldn’t fathom loving anyone more than Dom. My mom simply replied, “You just become richer in a way you’ll never know.”

After Dom, we suffered through two miscarriages— One was pretty far along, and it hurt. I remember thinking maybe this was God’s way of telling me I wasn’t meant to have any more.

Then came Vinny. Oh, my spitfire Vinny. I learned what my mom meant. My mom was right. You become richer. I believe a mother’s heart grows with each child to the point where a mother’s heart consumes her entire being.

I was told I miscarried him. We had even been told to schedule a dilation and curettage (D&C)—and low and behold there was a heartbeat. Strong and amazing.

When Vito was born he was in the NICU for a short time. When we were going home I had to step out to sign some paperwork and Vinny started shouting, “Hey! Hey!” Trying to get out of the car seat, telling us we were forgetting his new buddy… The same buddy he kicked out of his swing a couple days later.

He was diagnosed with brain cancer at 11 months old and for 15 months he valiantly fought medulloblastoma, posterior fossa syndrome, sepsis, radiation, infection after infection, eight brain surgeries, chemo and more. He learned his basic skills only to lose them, relearn them and lose them again. He was in the process of relearning them and preparing for a stem cell transplant when a brain bleed during a routine shunt surgery took his life. We believe with all of our being that Vito had a mission on earth and he was meant for things we don’t even know. We miss him every day, but we know he is wrapped in angel’s wings.

It’s only fitting that recent days have started gloomy and turned out beautiful because I can’t help but think of Vito’s life and afterlife. He battled and was in pain most of his life. Yet, in the end, it is in the utter glory of the holy kingdom.

Every day, I find myself bawling on the way to the office, to sleep.

For almost three years, people have told me they don’t know how I do it, that they would be crippled and in bed if they’d lost their child. I understand the need to say that. I do.

Yet, at the same time, I found myself wondering if I even loved my children. How could I love them if I am walking around? Functioning? I shouldn’t be. I must be a cold horrible person.

I recently read a quote: Our biggest weakness makes us our strongest.

My children are my weakness. My utter weakness. I say this as someone who never wanted children.

f you told me I’d have five children, I’d laugh at you and pour another shot of tequila and light up another cigarette. But even after five children, that moment when they take their breath and enter the world changes your life, no matter how many you have. My first child changed my life just as much as my fifth.

I became addicted to them, in love with them. If I could experience motherhood over and over again I would.

They are my weakness and strength. My post-partum depression after Vito was the worst. I remember breaking down. To the point, it seemed that all I saw was black. I felt so weak. My husband and parents said, “Nicole look at your three boys. You’re not weak. You pour your strength into your children and take on their weakness, so grow more strength. “

It’s what I have dedicated my life to.

My children are my weakness and therefore my strength.

The pain of birth labor is extreme. You literally give your being for months and tear your body to bring them into this world. The birth into afterlife is a lifetime of pain and giving and tearing and even despair.

But I’d do it to know he was pain-free. It’s my final gift to him.

I play Vito’s last two months over and over in my head. He tried telling us his body was worn.

As radiation took his ability to sit, as we watched him unable to move his limbs, as it burned his skin, as he screamed in pain and had seizures.

He tried to tell us his body was worn.

His eyes looked at us in so much pain. We begged for more days. We pleaded for years.

I know he hung on for us. Because of his love for us. But I also know he told me that day in the hospital as we sat by his side, that he just couldn’t anymore.

He gave everything he had— Everything for us to keep us pain-free. He took our pain.

So every day of my life my goal is to give. Give like Vito. There was a time in my life I’d say what’s in it for me. But I’ve learned eternal love is to give with truly no expectation. Vito taught me that.

He gave and gave until his last breath—even those. As his body shut down. As he was drowning in his own lungs. He gave us more and more. One last cuddle. One last sigh.

My dear Vito. Every night I imagine kissing you and putting you to bed. If I could draw what I feel it would be my heart pouring love to you. Wherever you are. I imagine the most beautiful eagle carrying you all of my kisses and hugs.

Nicole is a big city girl living in small town Waconia after following the love of her life to Waconia when the Air Force moved him to the tundra of Minnesota. She is the proud mom of five babies. She’s a hopeless romantic with her high school sweetheart, and a fierce warrior for foster children, children’s rights and pediatric cancer research.

She was a foster kid who was adopted as an older child by an amazing family. She went to an all-girls school in Chicago and fell in love with a boy from an all boys school.

He said they’d get married and have kids. She said, “Ya right, I want to travel the world.”

More about Nicole and her family:

Four boys and one girl later, each of our children has changed us and shaped us.

Our oldest Dom has oculomotor apraxia and is living with a leg injury from a horrific accident. Yet, he has the optimism of a saint and a smile that could light the darkest tunnel.

Our Vinny is a wild, spirited 4-year-old. We say Vinny was born running and hasn’t stopped since. He has epilepsy and Dysautonomia. He has very high demanding sensory needs that exhaust you but yet light a fire in you.

Our Vito is our third. He was diagnosed with brain cancer at 11 months old and for 15 months he valiantly fought medulloblastoma, posterior fossa syndrome, sepsis, radiation, infection after infection, eight brain surgeries, chemo and more. He learned his basic skills only to lose them, relearn them and lose them again. He was in the process of relearning them and preparing for a stem cell transplant when a brain bleed during a routine shunt surgery took his life. We believe with all of our being that Vito had a mission on earth and he was meant for things we don’t even know. We miss him every day, but we know he is wrapped in angel’s wings.

Our Luca was born almost two months exactly after Vito was diagnosed. He is everything his name says. He is a brute that doesn’t take anything, but he’s a softy and rolls over with any tickle. He has eyes that will captivate you and a laugh that is music to the soul.

Our Gia was our surprise baby. We found out about her the day we found out Vito’s cancer had come back. I felt her first kick holding Vito as he took his last breath. They have an amazing connection and she is a spitting image of him. She has helped healed places in our hearts and soul that throb of pain.

Thor and Loki are our two fur babies. As I held Vito when he was being sedated for his last surgery, I promised him I’d buy him a puppy if he pulled through this. Even after being partially asleep his eyes sprung open and he giggled a deep loving giggle. It was the last time I made my son smile and laugh. A fellow oncology family had puppies and they were labs, one of Vito’s favorite therapy dog’s was Cash, a lab, so we were completely insane and took two in. Thor was named after Vito’s last Halloween costume and Loki, Thor’s brother.

Our family of nine is chaos. We are about as stable as an ice cube in the Sahara desert. But it’s our life and we love everything about it. 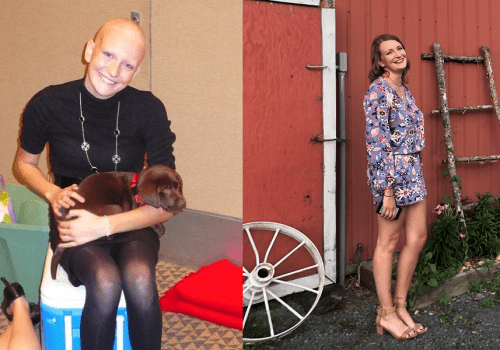 This piece was written by Katrina Siebels, who recently celebrated being 10 years cancer-free. I’m not quite sure where the past ten years ha...

“I really didn’t understand my diagnosis; I was very hungry and just wanted a doughnut to eat,” recalls 11-year-old Mathew Odette about t... 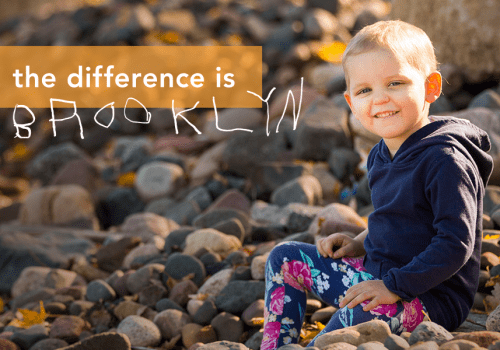